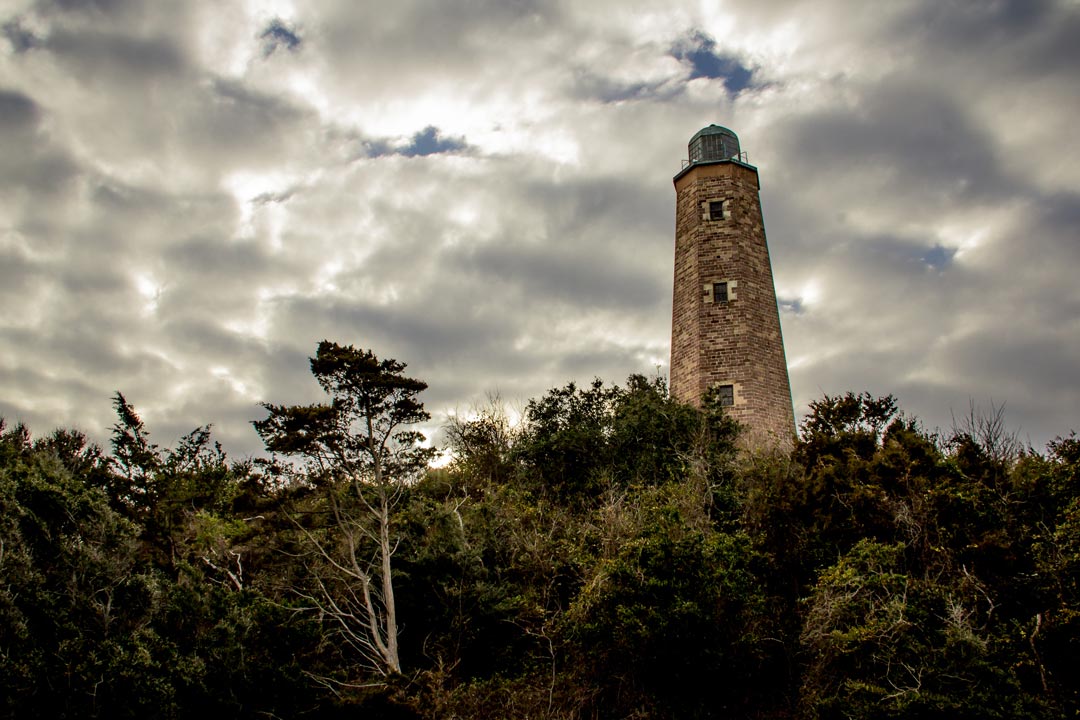 Virginia’s Old Cape Henry Lighthouse, built in 1792, is one of the oldest lighthouses in the country. The third oldest still standing, in fact – and it’s open for tours!

Actually, Cape Henry is home to two lighthouses. The “new” and still active one was built just 357 feet away in 1881. The original tower has almost 100 years on that, making it the oldest lighthouse standing watch over Chesapeake Bay.

The old tower also has the distinction of being the first federally funded public works project taken on by the then new United States government. The iconic, unpainted sandstone tower is 90 feet tall and serves as the official city symbol for Virginia Beach.

History of the Lights

The Old Cape Henry Light is located very near where English settlers first set foot in the New World, on their way to settle in Jamestown. A tablet marking the site of the “First Landing” was placed here in 1896.

Construction of the lighthouse was authorized by George Washington and the project was overseen by Alexander Hamilton. The tower was built of the same Aquia sandstone used in Washington, D.C.’s classic buildings. George Washington was also instrumental in choosing the light’s first keeper: one Laban Goffigan of Norfolk. 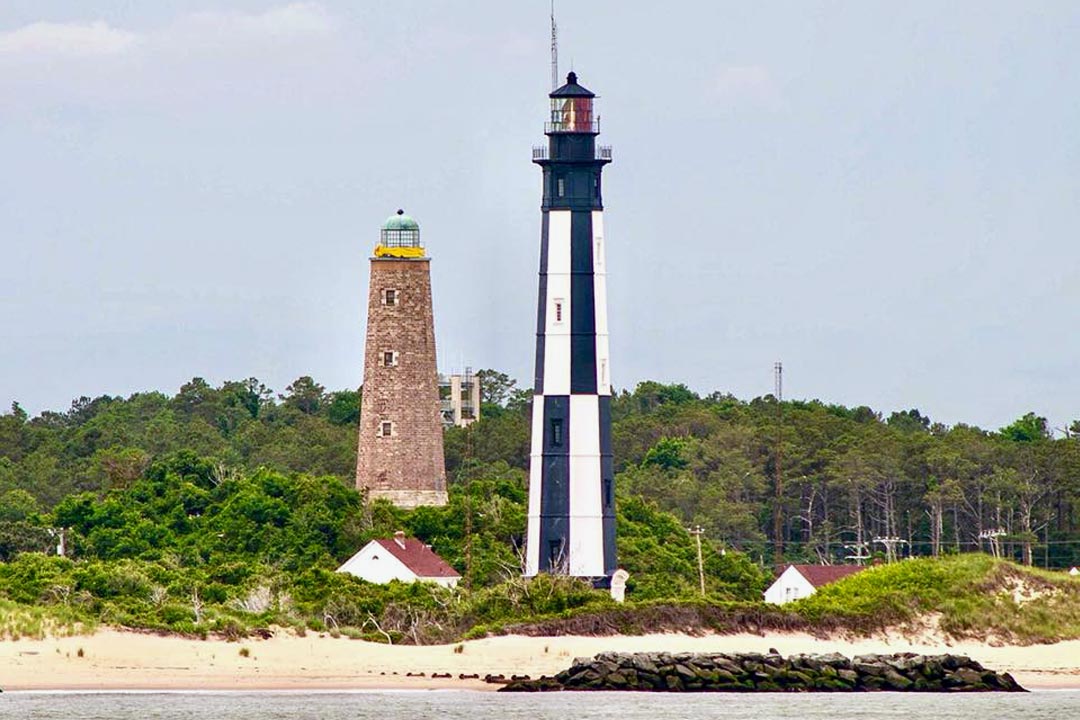 Confederate troops purposely damaged the tower during the Civil War to disrupt the navigation of Union troops on Chesapeake Bay. By 1870, the large cracks were evident on six of the tower’s eight sides. Though reinforced with brick, it was clear the older tower needed to be replaced.

By 1881, the black and white striped replacement light tower was in place. The new, 164-foot octagonal light has been operated by the U.S. Coast Guard since 1939. It remains active and is closed to the public – but you can get great views of it from the old tower …

The Cape Henry Light is typically open daily from 10am to 4pm. It is located at 583 Atlantic Avenue, Fort Story, VA 23459. At First Landing State Park, turn left into the west gate of Fort Story. 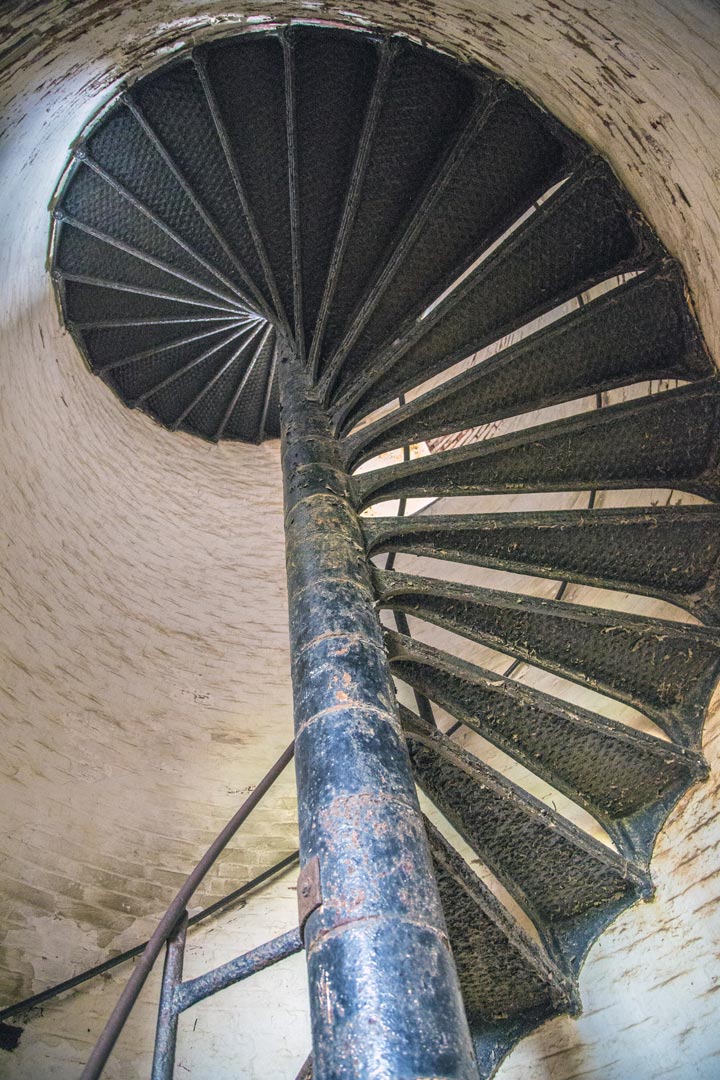 Both Cape Henry Lights are located on the grounds of the Joint Expeditionary Base Fort Story, operated by the U.S. Navy. Access to the lighthouse is through the fort’s gates and all visitors over 16 are required to show a valid student, state, or Federal ID. Vehicles may be subject to search and you may also need proof of vehicle registration/rental agreement and proof of car insurance.

Visitors to the lighthouse can enjoy a variety of tours and talks covering the fascinating history of the lighthouses and the Cape Henry area. With First Landing in the same vicinity, you can bet there's enough in the area to keep you happily busy for the entire day!

You must be at least 42″ (1.0668 m) tall to climb the tower but you should if you can. The views from the top of the Chesapeake Bay and the Atlantic Ocean are truly spectacular.

Picnic tables are available for those who want to enjoy a rest or a snack at this historic site.

Be aware that the tower can become exceedingly hot during summer months and is closed to visitors when the inside reaches 125°F (51.667°C) or more. The tower is also closed during thunderstorms and other extreme weather.

Learn more online at the Cape Henry Lighthouse website. You can also visit the lighthouse on Facebook.

For the best in lodging, you simply cannot top a Virginia Bed and Breakfast. No matter where you find yourself on your Virginia getaway, you can rest assured there is a supremely comfortable Virginia inn somewhere close by. Find your Virginia B&B today!