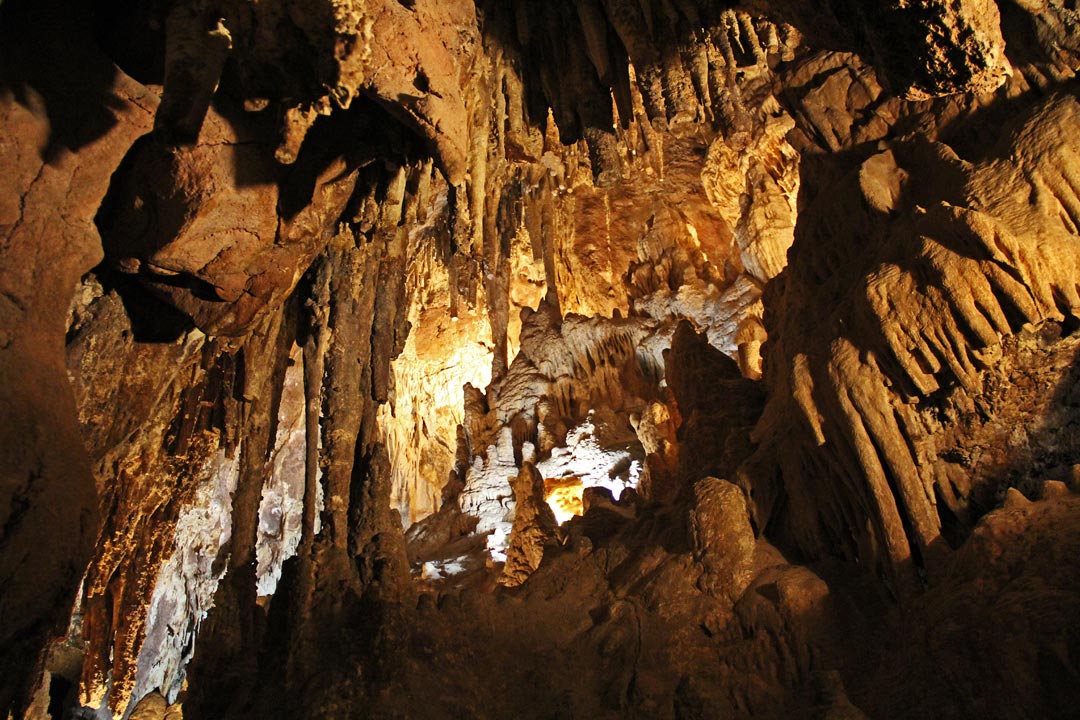 Skyline Caverns were not discovered until 1937 and then by a retired geologist. Come see the rare wonders he uncovered in the largest and only developed cavern in Virginia's Warren County.

Skyline Caverns, located in Front Royal, VA in the Shenandoah Valley, are a rare find: an unspoiled set of caverns.

Most show caves around the country were discovered during the 1800's or early 1900's and have suffered heavy damage over the years from curious visitors. It's natural for folks to want to take a bit of the wonder home with them - but the effect after a few thousand visitors ...

Skyline Caverns, has a different story, however. They were discovered by a retired geologist named Walter S. Amos.

Amos knew how to find caves using surface topography and spent his free time looking for previously undiscovered ones. In 1937 he hit pay dirt - or pay space, I suppose - and discovered Skyline Caverns. A series of caves that had lain hidden beneath the earth's surface for 60 million years!

The late discovery of Skyline Caverns, by a retired geologist who helped to carefully prepare them for visitors, is a very unique thing. Not only was science (rather than accidental stumbling) used to find the caves, their contents remained undisturbed. Consequently, the caverns are home to some rare sights, like anthodites.

Anthodites are cave formations (speleothems) shaped in clusters of long, needle-like crystals that radiate outward from a single center point. Skyline Caverns is one of only a few places on earth where these delicate and unique formations can be seen. In fact, it's home to the 18-inch long "Chandelier" - the world's largest and oldest discovered anthodite. 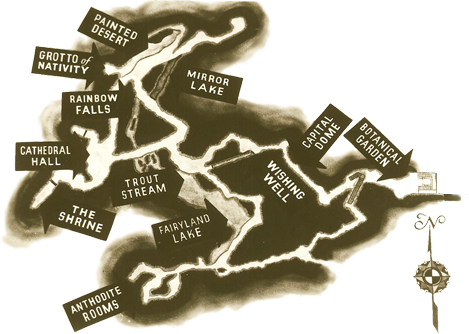 The Chandelier isn't the only amazing attraction you'll see at the caverns. Not by a long shot! Skyline Caverns is home to three underground streams and the 37-foot tall Rainbow Waterfall. Other attractions include the Capital Dome, Fairyland Lake, the Painted Desert, Rainbow Trails, the Wishing Well, and so much more.

Guided, one-hour tours of the caverns are led by well-trained, knowledgeable guides. Their expertise will reveal both the caverns' geological and human history.

Many of these attractions listed above are illuminated by award-winning lighting systems. At some point your tour guide may shut off all the lights to show you what real dark is like. Brrrrrr!

Skyline Caverns are “living,” meaning water still continually drips down to grow and shape the caverns. The caves stay a constant 54 degrees but it feels cooler with the humidity. A jacket and sensible shoes are a must.

Looking for more than subterranean adventure?

Skyline Caverns also offers a Miniature Train ride, a Mirror Maze, and Nature Trails. If you're thinking the first two attractions are for kids only, think again. Only old grumps should feel free to ignore them.

Hungry? There are snacks, sweets, and drinks in the Caverns Gift Shop - along with lots of nice keepsakes.

Hours change with the season. Visit the Skyline Caverns website for more information. You can also find them on Facebook.

Skyline Caverns aren't the only attraction in the area, either, not at all. Virginia Canopy Tours is right nearby, along with Shenandoah National Park, Rose River Falls, and the Appalachian Trail, too.

No matter what brings you to Virgina's beautiful and historic Shenandoah Valley region, nothing guarantees your comfort like staying at a Virginia bed and breakfast. Beyond delicious breakfasts and top-tier amenities, a Virginia inn can also provide an inside view of what to see and do in the area. Don't settle for the same, old, stale, cookie-cutter hotels and motels. Book your stay at a locally owned and operated Virginia B&B today!