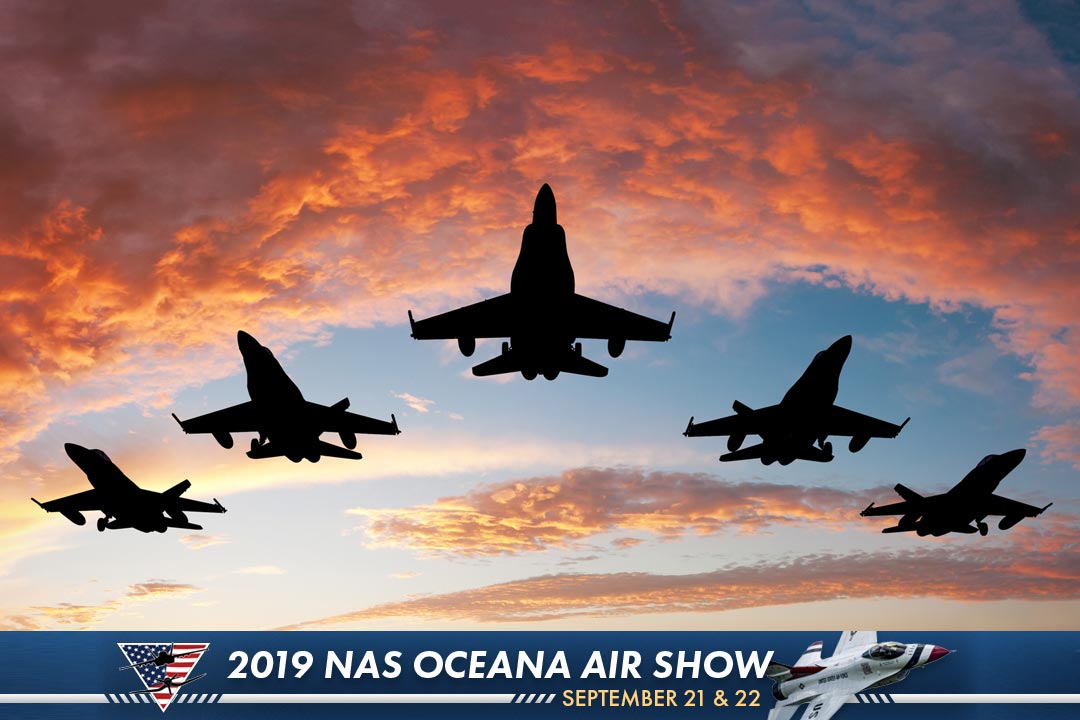 It's a bird, it's a plane, it's Oceana Air Show 2019! Two days of high-flying fun and excitement in Virginia Beach, VA - September 20th and 21st, 2019. This year's event features some very special guests: The U.S. Air Force Thunderbirds!

Naval Air Station Oceana's annual air show has been held almost every year since 1953, making it a beloved, regional tradition. It never fails to attract spectacular performers or thrill audiences. 2019 promises no different!

As I said at the top, this year's special guests are the The U.S. Air Force Thunderbirds. Though the highly skilled squadron has flown in more than 3,500 aerial demonstrations, this is their first appearance at the Air Show. The Thunderbirds will perform approximately 40 maneuvers of formation flying and solo routines, as well as a static ground show.

Other highlights this year include some of the best civilian and military performers around. You'll see the Skytypers, Gene Soucy, John Klatt, Skip Stewart, and Greg Shelton. Skydive Suffolk and the USASOC Black Daggers Jump Team will be on hand, as will Firewalkers International.

The air show will also feature tactical demonstrations by the F/A-18F Super Hornet, a Fleet Flyby, and the truly stunning Air Power Demonstration. This year will also see the return of Les Shockley's Shockwave Jet Truck. The recently redesigned, smoke and thunder spewing, jet-powered Peterbilt truck has to be seen to be believed.

The party begins at 6:30pm with a United States Fleet Forces Band concert of pop hits. At sunset, a U.S. Navy F/A-18 Super Hornet will perform three afterburner flyovers, followed by a parachute team jump onto the beach. Finally, the U.S. Air Force Thunderbirds will take the stage before mingling with the crowd.

The event is is free, open to the public, and continues until 9:30pm. Don't miss it!

Admission and parking are free. All bags and hand-carried items are subject to search and inspection prior to entry onto the flight line. Other restrictions apply. Be sure to read the Air Show security guidelines and restrictions if you plan to attend.