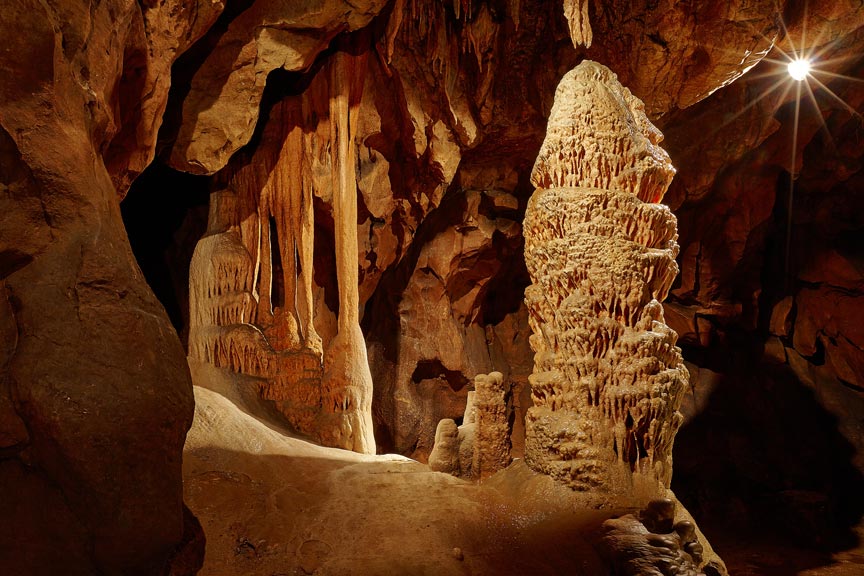 Come tour a cave whose complex network of underground passages and rooms has never been fully explored. Endless Caverns, in New Market, VA has been mapped out to 6 miles - with no end yet in sight.

Fascinating caverns riddle Virginia's Shenandoah Valley. One of the more mysterious, however, is Endless Caverns.

Two boys hunting rabbits discovered the cave in 1879, or so the story goes. Moving some rocks to flush their quarry, they discovered a hole in the ground. Collecting some ropes and candles, they returned and, lowering themselves down in, discovered a subterranean world of natural chambers, passages, and strange stone formations.

Tours of the cave began not long after. Electricity was added in 1920 to help illuminate the vast and expanding world. Despite a long public history and numerous attempts to do so, the cave remains only partially explored. No one still really knows how far or deep the cave actually goes.

A World Going On Underground

Endless Caverns is a limestone solution cave. Water slowly washes away softer minerals, leaving passages and rooms behind. It is a "living cave," meaning that it continues to be formed by the passage of time and water.

One of the other things left behind by the constant and endless drip of water are the strange rock formations know as speleothems. The most common form of these are stalactites and stalagmites; conical rock shapes formed by dripping mineral waters. Stalactites and stalagmites aren't the only speleothems, though. There are also straws, columns, cave corals, flowstone, and much more.

Endless Caverns' rooms and passages are decorated with a variety of fascinating speleothems. The Cathedral Room is especially stunning with its massive and complex shield formations.

Tours of the caverns take approximately 75 minutes travel just under a mile - Virginia's longest commercial cave tour! The cave temperature hovers around 55ºF (12ºC) all year long, so dress appropriately. Endless Caverns is more cave like than many other show caves, with narrow crevices instead of wide walkways.

Hours vary seasonally. Learn more with a visit to the Endless Caverns website. You can also visit them on Facebook.

Exploring a cave can be a lot of fun but staying somewhere that reminds you of a cave definitely isn't! Whenever you're in Virginia, do yourself a huge favor and book accommodations at a Virginia Bed and Breakfast. Virgnia B&B's provide uncommonly comfortable amenities, nutritious breakfasts, and an insider's knowledge of the area. Seriously - why on earth would you stay anywhere else? Book your stay today and discover the Bed and Breakfast difference!