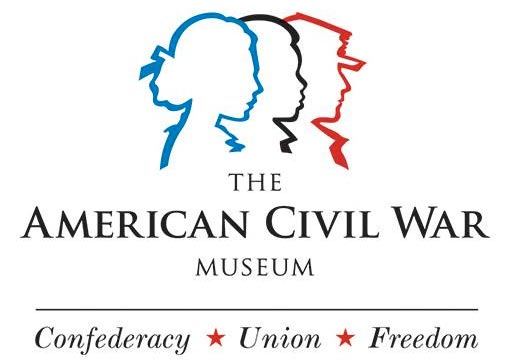 The American Civil War Museum was originally three separate museums, each located in the Greater Richmond Region of central Virginia. The museums merged in 2013 with combined mission of preserving and telling the history of the American Civil War. Each museum has it's own story to tell through comprehensive collections of artifacts, manuscripts, books, pamphlets, and photographs.

American Civil War Museum - The White House of the Confederacy

1201 East Clay Street, Richmond, VA 23219
The White House and Museum of the Confederacy is located in what was the executive mansion of the President of the Confederate States of America. Jefferson Davis and his family lived here from August 1861 until April 1865 and a large number of Davis family artifacts still remain.

After the war, the building served as headquarters for the U.S. army and Military District No. 1 during Reconstruction. It became the Museum of the Confederacy in 1896 and had its Civil War era appearance restored in 1988. Late last year, the collections started being moved to the new facility at Historic Tredegar. The White House of the Confederacy, itself, remains open for daily tours during this transition.

Tredegar supplied about half the artillery used by the Confederate States Army during the conflict. It was also the source of the iron plating for the Confederacy's first ironclad warship, the CSS Virginia. The plant employed domestic and foreign workers, along with slaves and free blacks.

Tredegar has been designated Richmond’s Official Gateway to the Civil War and is considered one of the nation’s most significant Civil War sites. It was the first museum in the country to explore the Civil War from Union, Confederate, and African American perspectives.

Historic Tredegar is currently seeing an expansion that will open in March of 2019 and include the Museum of the Confederacy. The museum is open during construction, however, so don't let that stop you from visiting.

159 Horseshoe Rd, Appomattox, VA 24522
Most folks can't see the name "Appomattox" without thinking of the Civil War. General Lee’s Army of Northern Virginia surrendered here, effectively ending the Confederacy and the war. Appomattox is also emblematic of the reunified nation's new beginnings, so it is more than fitting that the American Civil War Museum is located here.

The American Civil War Museum - Appomattox’s permanent exhibit explores its subject with more than 400 artifacts, photographs, and documents. Visitors will see such iconic items as the uniform coat and sword that Robert E. Lee surrendered in, Appomattox parole lists, and many other fascinating, historical artifacts.

Each facility of the museum has its own hours and attractions.
Learn more about each museums location, exhibitions, and events online at acwm.org.

There are endless things to do and see during a Virginia getaway - but you're going to want somewhere to stay. Why let some faceless corporate chain treat you coldly when you can receive true Southern hospitality from a Virginia bed and breakfast? Nothing guarantees your comfort and satisfaction like staying at a Virginia B&B. Book your stay at a Virginia B&B today!