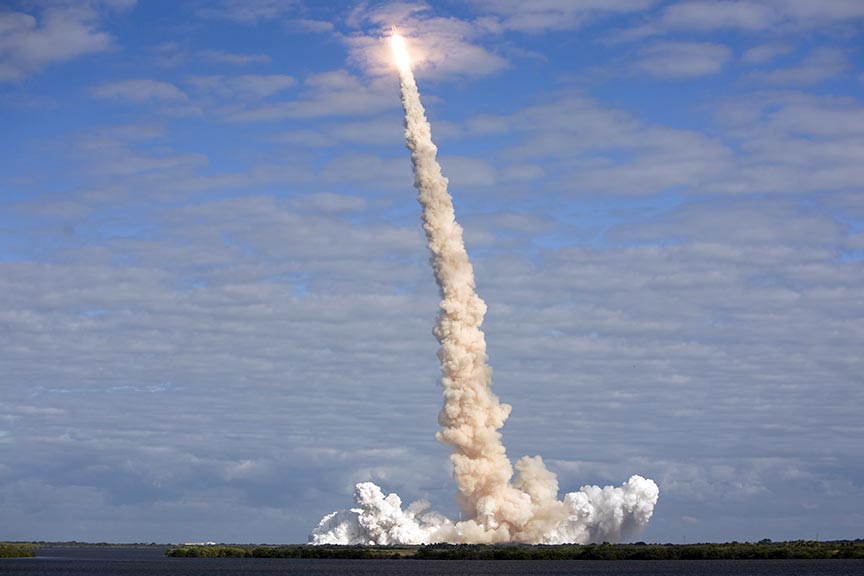 Visit Virginia's Wallops Flight Facility to explore the NASA Visitor Center and, if you time it right, catch a live NASA rocket launch!

Does this mean you can come and watch a NASA rocket launch from the facility? It most certainly does!

Wallops Flight Facility grounds are open to the public for most launches. In fact, you can watch rocket launches two different ways at Wallops.

The facility has set aside that provide a clear view of all the launches. Night launches are particualrly spectacular - but no space launches are dull!

Space launches are popular but parking is limited and first come/first served. Consequently, if you hope to watch a launch from Wallops Flight Facility, getting here at least 30 minutes early is key.

You can also watch a NASA rocket launch from inside the Wallops Flight Facility visitor center. The visitor center's auditorium is state of the art. A nine-television, high-definition, flat-screen display lets you watch the launches in comfort and great detail from your auditorium seat. The live camera feeds provide clear views of the launch and, better yet, take you behind the scenes at the launch pad!

If you hope to catch a NASA rocket launch at Wallops Flight Facility, be sure to view this launch watching guide from the center.

Beyond launches, the visitor center also explores the past, present, and future of space flight through a number of fascinating exhibits. Plus, admission is free!

The interactive Science On a Sphere® Theater projects computer animations of Earth's storms and changing ocean temperatures onto a six foot diameter globe. You feel almost like an astronaut hanging in space while you watch

The Magic Planet exhibit lets you delve deep into our solar system with an interactive touch screen. Select planets, stars, and moons from the display to see them appear on the sphere before you for in-depth and exciting study.

So go ahead, come visit. Wallops Flight Facility is your gateway to a space adventure right here on Earth!

Visiting Virginia's Eastern Shore? Great idea! Do you want to know how to make your Virginia vacation even better? Acquire accommodations at a locally owned and operated Virginia B&B! A Virginia bed and breakfast, like a Virginia vacation, can take many shapes but they do have a few things in common: uncommonly rich amenities, persoinalized service, delicious breakfasts, and an insider's view of where to go and what to do while you're here. Don't wait - book your stay at a Virginia inn today!