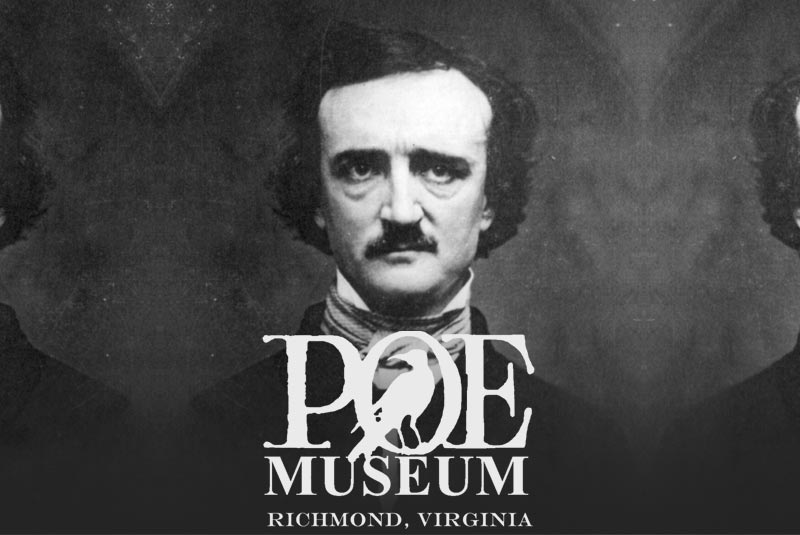 Edgar Allan Poe (1809 – 1849) was one of the most important and influential American writers of the 19th century. Though he's no longer accepting visitors, you can do the next best thing by dropping by the Edgar Allan Poe Museum in Richmond, VA!

Edgar Allan Poe was the first author to try to make a professional living as a writer. Known as the architect of the modern short story, Poe's “The Murders in the Rue Morgue” also kick-started modern detective fiction. His poem, “The Raven,” is one the most famous in national literature.

The Edgar Allan Poe Museum celebrates the legendary author's life with the most comprehensive collection of related artifacts in the world. The museum's collection contains Poe's letters, manuscripts, and all manner of artifacts, including a pair of socks and locks of the author's hair!

Poe lived in Richmond off and on throughout his life. Though he has immeasurable literary stature today, his reputation at the time of his death was not so glowing. In fact, Richmond was initially eager to distance themselves from the notorious drinker and gambler. They even declined an early proposal to erect a public statue of the writer.

Consequently, many of the buildings actually associated with Poe's time in Richmond have not been saved. Instead, the Edgar Allan Poe museum found its home in Richmond's oldest building, the Old Stone House.

The Enchanted Garden is also home to two black cats who were discovered here as kittens. The museum staff decided, appropriately enough, to adopt the cats, Edgar and Pluto! be sure to say "Hi," when you stop by!

1914-16 East Main Street, Richmond, VA, 23223
Visit www.poemuseum.org for hours, special events, and other information. You can also follow the museum on Facebook.

The Poe Museum isn't the only place in Virginia dedicated to the famous author. If you're ever near the University of Virginia campus in Charlottesville, you'll probably want to stop by The Raven Room.

Visitors can view the room through a glass door while listening to information about the author. Furnishings include a settee from one of Poe’s actual homes, a writing desk, bust of Pallas, and yes, a stuffed raven.

The Raven Society was started in 1904 to honor scholarly pursuits and exceptional students and faculty. The group still uses the dorm to initiate new members.

There are endless reasons for taking a Virginia vacation, not the least of which is we have the best lodging around - and I don't mean hotels and motels. Virginia bed and breakfasts are locally owned and operated by people so in love with their communities, they want to share them. When you stay at a Virginia inn, you're not only getting the best lodging value and comfort around, you're also getting access to inside info on what to see and do.

Come discover the true meaning of hospitality with a stay at a Virginia B&B - you'll be so very glad you did!