The Paramount Theater evokes a time long past, that of old Hollywood and the golden age of cinema. With delicate detailing, as well as exquisite plaster moldings, painted tapestries, and brass chandeliers, as soon as you step inside, you can't help but feel the magic.

Guests of the Inn at Monticello love this theater and it's easy to see why. With its neoclassical grandeur, the Paramount brings national talent to the stage. John Cleese, Emmylou Harris, David Crosby, Paula Poundstone, and John Williams are just some of the acts that have performed there.

You'll also find a range of movies to watch, too. From The Maltese Falcon, The Grateful Dead Movie, Notting Hill to the Virginia Film Festival's Paris Opera. And the acoustics are divine!

Yes, Charlottesville loves the Paramount. But the road to its current success was many years in the making.

History of the Paramount Theater

The Paramount opened Thanksgiving Eve in 1931 and became a landmark overnight. Even though the stock market crashed two years earlier and the country was in a financial downturn, the theater thrived. 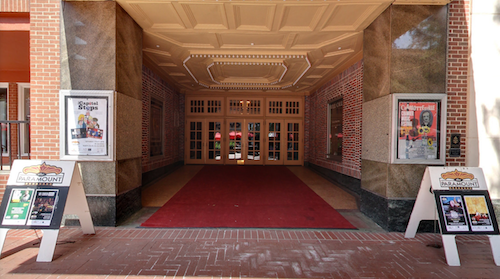 Considered a premier Charlottesville destination, The Paramount Theater was known as a special movie-going experience. Audience attendance numbered in the thousands each week. People came to escape the dismal economic conditions of the time, enjoy opulent surroundings, and a movie.

For four decades, this grand theater hosted fashion shows, cartoons for kids, films, war bond drives, and many popular rock artists. By 1974, however, the crown jewel of C'ville closed. But the city couldn't let it die and efforts were launched to save it from demolition.

In 1992, the non-profit, Paramount Theater, Inc., purchased the building and used a grant from the City of Charlottesville to begin restoration. During the ensuing years, the Washington architectural firm Martinez & Johnson Architecture and the Charlottesville firm of Bushman Dreyfus Architects worked together to restore it.

The 16.2 million dollar project included meticulous theater restoration as well as creating new facilities that allowed the Paramount to become a regional performing arts center. Finally, on December 15, 2004, over 30 years after it closed, the Paramount Theater came to life once again.

New Life for the Paramount Theater

Today, when our lodging guests ask for places to go for entertainment, the Paramount is at the top of our list! This beloved theater continues to have a cultural and economic impact on our community. In 2015, it won the Charlottesville Family Reader Favorite Award for Favorite Movie Theater. In 2016, the theater won the Tourism Achievement Award by the Charlottesville/Albemarle Convention & Visitors Bureau.

That same year, it also won the 2016 Best of C-Ville Award for Best Theatre (Live), Best Place to Watch a Movie, and Best Music Venue. and the 2015 Charlottesville Family Reader Favorite Award for Favorite Movie Theater.

In 2017, the Paramount won the Outstanding Historic Theatre award from the League of Historic American Theatres. This award recognizes a theater that demonstrates excellencethrough its quality of services and programs, community impact, and quality of restoration or rehabilitation of its historic structure.

But aside from all that, the Paramount Theater is just a cool place to go for outstanding entertainment!

When you're ready to visit Charlottesville, consider staying at the Inn at Monticello. We're within walking distance of the Paramount Theater, as well as many other Charlottesville local favorites.